In late December 2019, the World Health Organization (WHO) received a report of a cluster of severe pneumonia of unknown cause in Wuhan, China. Further investigation revealed that the causal agent was a novel betacoronavirus, namely, severe acute respiratory syndrome coronavirus 2 (SARS-CoV-2). Subsequently, SARS-CoV-2 caused the coronavirus disease 2019 […]

In late December 2019, the World Health Organization (WHO) received a report of a cluster of severe pneumonia of unknown cause in Wuhan, China. Further investigation revealed that the causal agent was a novel betacoronavirus, namely, severe acute respiratory syndrome coronavirus 2 (SARS-CoV-2). Subsequently, SARS-CoV-2 caused the coronavirus disease 2019 (COVID-19) pandemic, whose clinical spectrum ranges from asymptomatic to mild upper respiratory illness to severe pneumonia resulting in death.

After being infected with SARS-CoV-2, humans produce SARS-CoV-2-specific antibodies, memory B cells, and CD4+ and CD8+ T cells. All of these cells have well-defined functions in the elimination of the infection. The immune response mainly targets the structural proteins of a pathogen. In the case of SARS-CoV-2, targets of the immune response include the membrane protein (M), spike protein (S), and nucleoprotein (N).

In addition to neutralization, antibodies activate various effector functions, which are mediated by their Fc domain. The persistence of serum antibodies may be one of the determinants of long-lasting immunity post-infection or vaccination. Anamnestic recall of memory T and B cells could also reduce infection at re-exposure as antibody titers decline. Memory immune response duration could depend on several factors, such as disease severity, cross-reactivity with human seasonal coronaviruses (hCoVs), ethnic background, age, etc.

Most studies on the evolution of the immune response to SARS-CoV-2 are conducted in Caucasian populations, partially due to a lack of data from high-risk areas. This lack of data from at-risk regions can hamper global vaccination efforts.

Now, a new study posted to the bioRxiv* preprint server focuses on functional immune memory to SARS-CoV-2, up to nine months in a Southeast Asian cohort, in the absence of re-infection.

Sixty-four Cambodian individuals with confirmed SARS-CoV-2 infection were included in the initial study and re-assessed six to nine months later. The chances of re-infection were low as the incidence of COVID-19 was low in Cambodia during the follow-up period. In addition, 70% of the patients displayed mild or moderate symptoms, while 30% remained asymptomatic. Based on the duration of viremia, 53% were considered “long shedders” because of the detection of viral RNA for more than ten days.

Between 55-66% of individuals showed antibody effector function activity up to nine months after infection. Scientists also found that S-, RBD- and N-specific memory B cells were maintained more than six months post symptom onset. Specifically, S1-and N- specific memory B cells persisted up to six to nine months post-infection, suggesting that B cells could be recruited after secondary exposure and might offer some protection against new variants. 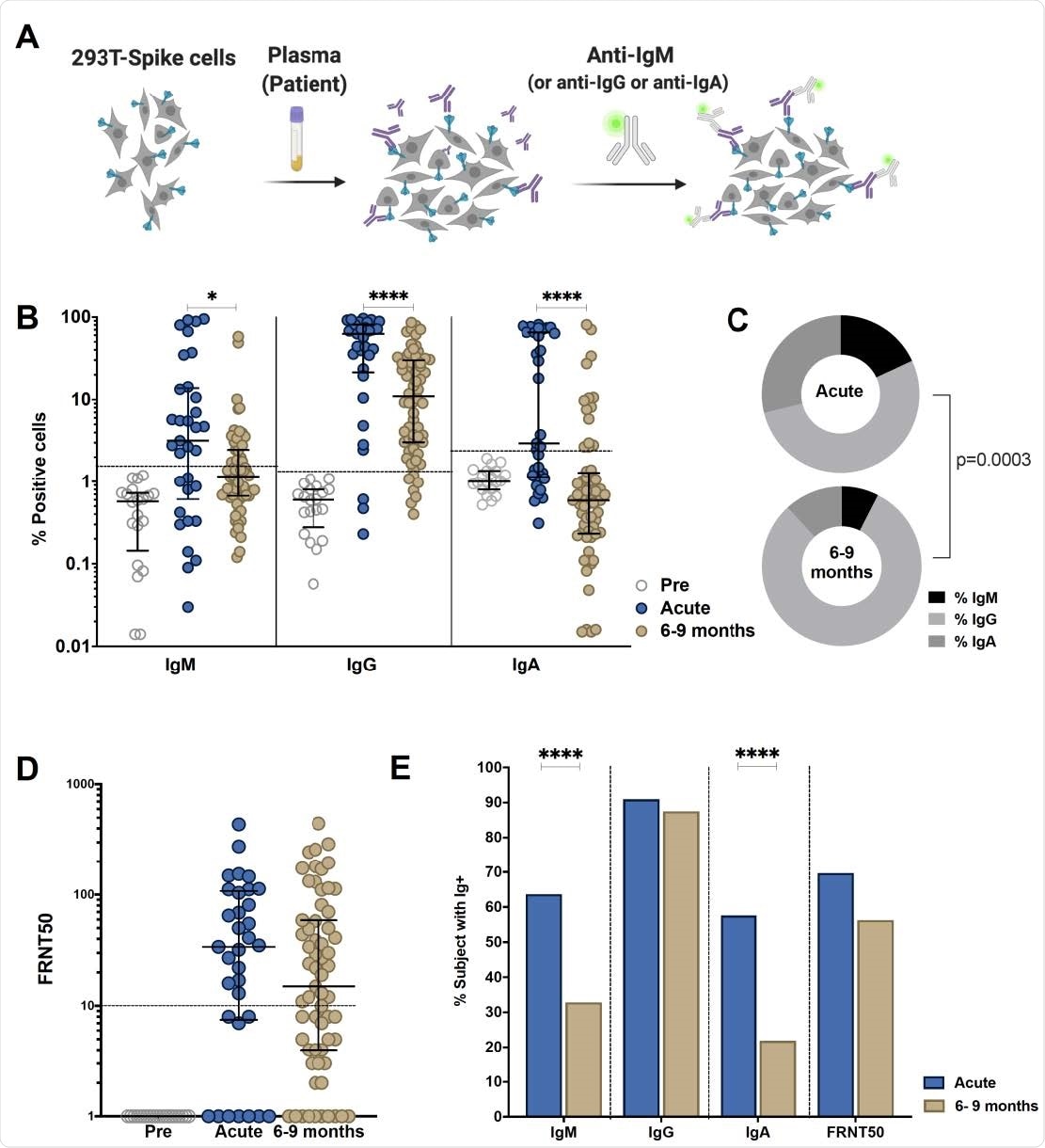 In this study, scientists observed no correlation between the S-specific cellular and humoral immune compartment at late convalescence. Moreover, correlations between anti-S antibody titers and Fc-related functions at late convalescence were found to be weak. Researchers concluded that serological testing alone might not be sufficient to understand the long-term immunity generated after SARS-CoV-2 infection completely.

The current study shows that different disease outcomes may have other implications for long-term immunity, influencing subsequent infection or vaccination.

Furthermore, this cohort study described the immune response in individuals of Asian origin and the absence of re-exposure to SARS-CoV-2. In addition, the scientists showed the persistence of humoral immunity, antibody effector functions, and virus-specific memory T and B cells six to nine months after infection. Therefore, this study enhances our understanding of long-term functional immunity.

bioRxiv publishes preliminary scientific reports that are not peer-reviewed and, therefore, should not be regarded as conclusive, guide clinical practice/health-related behavior, or treated as established information.

Wed Aug 18 , 2021
On the surface, golf doesn’t seem like the most physically demanding sport. But it would be a mistake to overlook the health benefits of 18 holes. That golf is old-fashioned or boring is one of the biggest misconceptions about it, according to Bradley Myrick, director of golf operations at TPC […]