Hawaii Department of Health officials today reported two new coronavirus-related deaths and 647 new confirmed and probable infections statewide, bringing the state’s totals since the start of the pandemic to 554 fatalities and 52,846 cases. The two latest deaths were on Oahu. According to the state Department of Health, the […]

Hawaii Department of Health officials today reported two new coronavirus-related deaths and 647 new confirmed and probable infections statewide, bringing the state’s totals since the start of the pandemic to 554 fatalities and 52,846 cases.

The two latest deaths were on Oahu. According to the state Department of Health, the deceased — a man and a woman — were in their 70s and had underlying conditions.

The state’s official coronavirus-related death toll includes 428 fatalities on Oahu, 62 on Maui, 59 on Hawaii island, two on Kauai and three Hawaii residents who died outside the state.

The U.S. coronavirus-related death toll today is over 623,000 and the nationwide infection tally is more than 37.1 million.

Today’s new confirmed and probable infection count by island includes 431 new cases on Oahu, 96 on Maui, 87 on Hawaii island, 26 on Kauai, one on Molokai, and six Hawaii residents diagnosed outside the state.

The total number of confirmed and probable coronavirus cases by island since the start of the outbreak are 37,653 on Oahu, 6,183 on Maui, 5,840 in Hawaii County, 894 on Kauai, 120 on Lanai and 131 on Molokai. There are also 2,025 Hawaii residents who were diagnosed outside of the state.

The statistics released today reflect the new infection cases reported to the department on Monday.

Health officials also said today that, of the state’s total infection count, 8,536 cases were considered to be active. Officials say they consider infections reported in the past 14 days to be a “proxy number for active cases.” The state’s total number of active cases increased today by 298.

The latest Hawaii COVID-19 vaccine summary says 1,810,177 vaccine doses have been administered through state and federal distribution programs as of Tuesday, up 2,047 from a day earlier. Health officials say that 61.5% of the state’s population is now fully vaccinated, and 69.5% have received at least one dose.

Sixteen hospitalizations in the overall statewide count are Hawaii residents who were diagnosed and treated outside the state. Of the 3,062 hospitalizations within the state, 2,485 have been on Oahu, 357 on Maui, 197 on the Big Island, 16 on Kauai, five on Lanai and two on Molokai.

According to the latest information from the department’s Hawaii COVID-19 Data dashboard, a total of 319 patients with the virus were in Hawaii hospitals as of today, with 64 in intensive care units and 51 on ventilators. Today’s total of patients hospitalized with COVID breaks the previous record of 315 set on Sept. 8, 2020.

This breaking news story will be updated as more information becomes available.

Tue Sep 21 , 2021
People wait next to empty oxygen tanks to fill them up for patients suffering from the coronavirus disease (COVID-19), outside a private oxygen supplier, in Lima, Peru February 25, 2021. REUTERS/Sebastian Castaneda LIMA, July 21 (Reuters) – Peruvian police said on Wednesday they had dismantled an alleged criminal ring that […] 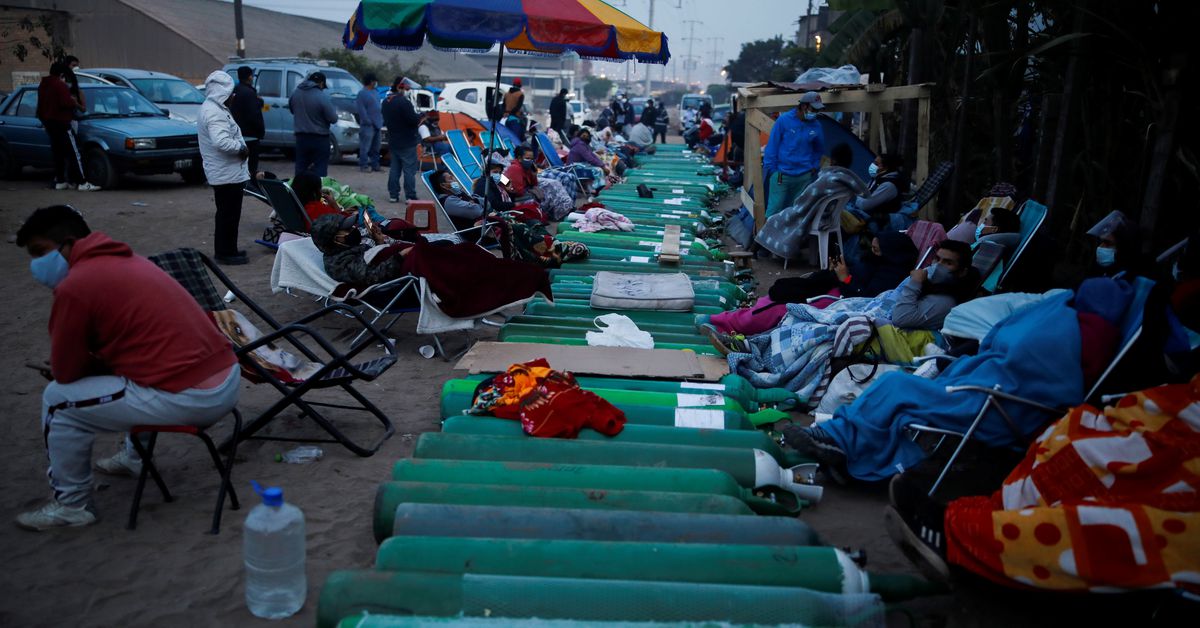