NEW ORLEANS — About 600 elderly residents have been evacuated from their homes and five deaths at four senior apartment complexes are being investigated by Orleans Parish Coroner’s Office, following wellness checks by the New Orleans Health Department Saturday afternoon.  Central City residents were loaded onto city buses Saturday afternoon and taken […]

NEW ORLEANS — About 600 elderly residents have been evacuated from their homes and five deaths at four senior apartment complexes are being investigated by Orleans Parish Coroner’s Office, following wellness checks by the New Orleans Health Department Saturday afternoon.

Central City residents were loaded onto city buses Saturday afternoon and taken to shelter at the Morial Convention Center after two bodies were discovered in the Flint Goodridge Apartment complex, which had gone without power since Hurricane Ida hit the city.

The deaths were announced by the Mayor’s Office, after the health department conducted wellness checks at eight facilities that were deemed unfit for ongoing occupancy.

““I am deeply concerned to have seen the conditions of these private apartment facilities where some of our most elderly and vulnerable community members reside,” New Orleans Health Department Director Dr. Jennifer Avegno said in a news release.

“It saddens me to have witnessed the failure of these facility operators to adequately prepare and protect their residents in one of our greatest times of need. The New Orleans Health Department and our public safety partners are utilizing every available resource to ensure that this does not occur again in our city.”

Residents at the four apartment complexes were evacuated, in addition to residents at the Peace Lake Towers, St. John Berchman, St. Martin Manor and Delille Inn. After being triaged by medical professionals, the residents were bussed from the convention center to shelters in northern Louisiana, and some to area hospitals, according to the release.

City Councilman Jay Banks, who represents District B, went to the Flint Goodrich Apartments when it the two bodies were discovered.

“The power is off and they didn’t have air or elevators and it got to be a very bad situation,” Banks said. “I wish someone would have reached out and made that known prior to today. We could have tried to help sooner.”

Additionally, “I wish they would have had a plan to get their people out,” Banks said of the property’s owner.

Moving forward, Banks stressed that residents should call the city if they are in a dire situation and ask for assistance.

“We are going to react as quickly as possible to make sure we get our citizens all of the help they need to get through this,” he said.

The public is encouraged to call 3-1-1 to report dangerous living conditions in senior apartment complexes.

Sun Sep 5 , 2021
Graphical abstract. Credit: DOI: 10.1172/JCI152379 Researchers from Duke-NUS Medical School, together with collaborators from the National Centre for Infectious Diseases (NCID) and Singapore General Hospital (SGH), have discovered a simple and rapid method to measure the T-cell immune response to the SARS-CoV-2 virus, which causes COVID-19. A growing body of […] 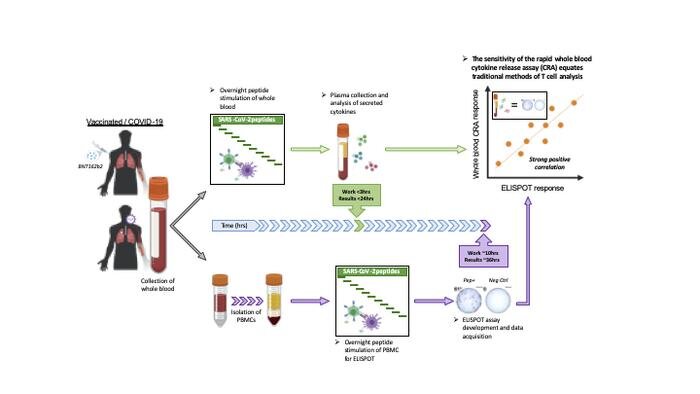