Diet culture is everywhere, from the grocery store to the doctor’s office. d3sign/Getty Images Imagine throwing out every food rule you’ve ever been taught — and becoming the happiest, healthiest version of yourself as a result. A growing movement of dietitians say you can do just that.  “Anti-diet dietitian” may […]

Imagine throwing out every food rule you’ve ever been taught — and becoming the happiest, healthiest version of yourself as a result. A growing movement of dietitians say you can do just that.

“Anti-diet dietitian” may sound like an oxymoron at first. But while the “diet” in “dietitian” simply means “the food that one eats,” the word diet has come to be associated with a strict food regimen intended to help you lose weight. That’s exactly what anti-diet dietitians are against.

Anti-diet dietitians encourage people to avoid restrictive diets and, instead, practice becoming the experts on their own bodies. You don’t have to count calories, cut carbs or carve out portion sizes in order to improve health. Instead, you can decide for yourself what to eat, based on how your body feels, your personal goals and your circumstances.

Our Health & Wellness newsletter puts the best products, updates and advice in your inbox.

Sound simple? It’s not so easy when you live in a culture that hyper-focuses on health and measures it solely by how you look. Diet culture is everywhere, from the grocery store to the doctor’s office, and it’s loud enough to drown out your intuition about how to treat your body, even at the cost of mental or physical health.

That’s why some dietitians have begun to actively advocate against diets, even when it means subverting their own training. One registered dietitian and nutritionist, Dalina Soto, has carved out a niche by fighting diet culture in-person and on social media. She founded Your Latina Nutrition to help Latina women take control of their eating habits and let go of guilt.

“Because I went to school for dietetics, I definitely subscribed to the idea of weight loss for health [at first],” says Soto, who also runs a practice called Nutritiously Yours in Philadelphia. “Once I started practicing and working in the community, I realized that there was so much more to health than what I was taught in a textbook. That’s when my whole career turned to that anti-diet message.”

I talked to Soto to learn more about why diets can be dangerous and how a diet-free approach can help you get back on track if you’re struggling with your body.

The dangers of dieting

Diet culture values thinness over all else, including health and well-being. As part of diet culture, it’s common to cut out entire food groups (like carbs), reduce portion sizes or otherwise restrict your food in order to achieve weight loss.

But the idea that thinness is the ultimate health goal is a myth. Health is so multidimensional that it could never be reduced to a specific size or number on the scale. In fact, contrary to popular belief, you can’t tell much about how healthy someone is simply by looking at them. And while it’s OK to lose weight if you want to (or do whatever else you want with your body), diet culture’s obsession with thinness is risky on a variety of levels.

Diet culture uniquely impacts people of color, too. “Unfortunately in people of color, eating disorders are underdiagnosed because we don’t fit the mold of looking frail and really small,” she says. “A lot of the time, our bodies are different.”

Diets can also be unrealistic. Many people who diet end up in a cycle of “yo-yo dieting” — repeatedly losing weight and then gaining it back. This can be hard on your body, not to mention your mental state. “When you look at the data, most diets fail, about 95% of them, because people can’t live so restrictive,” Soto says.

The benefits of an anti-diet approach

In place of diets, Soto teaches “intuitive eating,” a method that helps you develop eating habits that meet your individual needs, such as satisfaction, pleasure and nutrition — regardless of size. Some anti-diet dietitians also practice the “Health at Every Size” approach, which promotes balanced, flexible eating habits without size stigma.

Soto never advises her clients to restrict food, nor does she believe in “good” or “bad” foods. She teaches that all foods have nutrition, and you should have a variety of foods in your meals (including plenty of carbs!). Rather than restricting, Soto says you can always add nutrition, such as an extra fruit or vegetable, if it’ll taste good and you want to. That means no more guilt, which can be a huge relief to those who are used to berating themselves for eating the “wrong” meal.

Intuitive eating can help you learn to listen to your body without shame. “Every day you’re going to have different needs and different wants. We’re humans, we obviously are not robots, and so we’re going to expend energy differently every single day,” Soto says. On days where you expend a lot of energy due to stress or extra movement, for example, you might feel hungrier and need to eat more.

As you develop sustainable eating practices, you will find and settle into your body’s natural weight — no more yo-yo dieting. Weight loss may or may not happen, and there’s no shame either way.

If health isn’t about weight, though, then what is it about? According to anti-diet dietitians, you have the right to decide what health means to you and how much of a priority you want it to be.

“It’s really hard to let go of the buzz, so I often just challenge people to really ask themselves: ‘What would health be for me when it’s not a look and it’s not a size?’ Because you could always achieve that without the restriction,” Soto says.

For many of her clients, she says, health involves feeling comfortable in their bodies or being able to do certain activities, like running up a flight of stairs without losing breath. These are goals that are often hard to achieve under the strict rules of diet culture and food restriction.

It’s also important to note that there are many different dimensions of health, and only some of them are in your individual control. There are also “social determinants of health,” like where you live and how much access you have to health care, per the US Department of Health and Human Services.

One principle of the HAES approach is that health is not a moral imperative — no one is obligated to strive to be healthy, especially when health is inaccessible to many groups of people.

“Health is very individualized,” Soto says. “We have to let go of this notion and idea that everybody’s going to be healthy, and that in order for us to be worthy and treated with dignity by the medical system, that we have to be healthy.” She adds, “There’s people that are born with chronic issues, have genetic conditions, or due to whatever reason are never going to be ‘textbook healthy.’ But that doesn’t mean that we have to treat them different or that they’re less valuable as a human.”

If you do have a medical condition that requires a special diet, anti-diet dietitians are qualified to help with that, too.

You can enjoy your cultural foods

Diet culture in the US doesn’t make much room for people from non-American and non-European cultural backgrounds, whose traditional foods often don’t fit into the MyPlate model of nutrition. In fact, many staple cultural foods are shamed by health enthusiasts for being “unhealthy,” like white rice and beans. But by trying to “healthify” traditional foods, people of color run the risk of erasing their cultures and missing out on the nutrition that was already packed into those meals, according to Soto.

Also, Soto says, traditional foods aren’t the real culprit behind the health disparities that plague many communities of color. “The main issue is health equity. We have to look at the broad picture here and look at who actually has access to quality health care and who doesn’t. Who has access to supermarkets, salaried jobs, paid time off — things that are sometimes out of our control that definitely affect our health,” she says. “Health is affected by so much more than just what we eat and how we move.”

“How is it that in our countries, people aren’t sick eating our foods, but then they come to the US and they are?” she asks.

How to find an anti-diet dietitian

If you’d like to improve your relationship with food or work on your health outside of the pressures of diet culture, an anti-diet dietitian may be worth a try.

Soto also emphasizes that finding a culturally competent dietitian who will respect and understand your traditional foods can be just as important as finding an anti-diet one. “If the dietitian is willing to learn and understand what your cultural foods are, I think whether she’s anti-diet or not, that’s a first step,” she says.

By doing your research and asking questions, you can find the right dietitian for you, no matter your health goals. “In the era of the internet and reviews and things like that, it’s much easier to find someone that is willing to listen to you and be a right fit,” Soto says.

The information contained in this article is for educational and informational purposes only and is not intended as health or medical advice. Always consult a physician or other qualified health provider regarding any questions you may have about a medical condition or health objectives.

Vaccinations rise in some states with soaring infections

Fri Jul 23 , 2021
Vaccinations are beginning to rise in some states where COVID-19 cases are soaring, White House officials said Thursday in a sign that the summer surge is getting the attention of vaccine-hesitant Americans as hospitals in the South are being overrun with patients. Coronavirus coordinator Jeff Zients told reporters that several […] 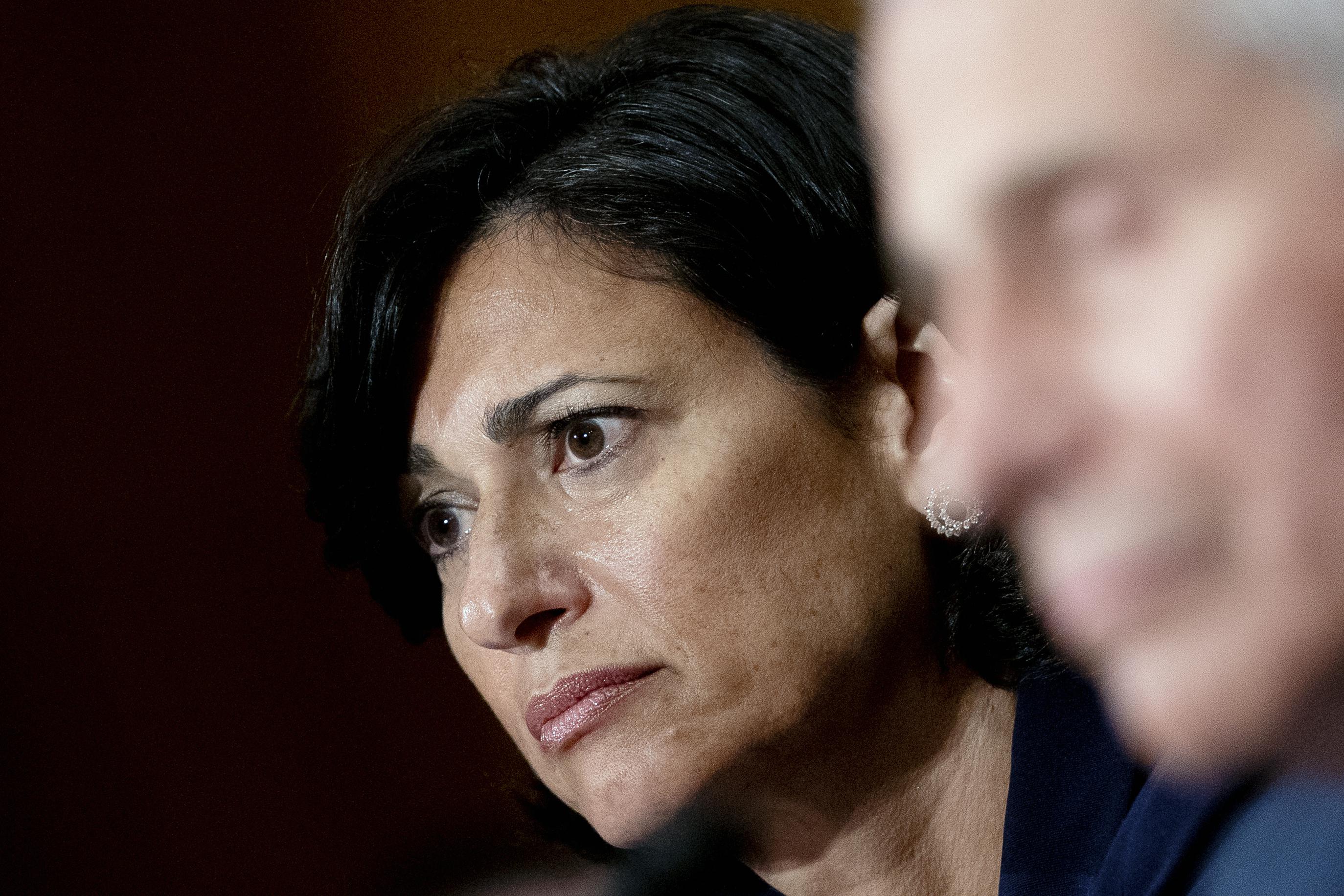