EUGENE — For Oregon to achieve its goals it needs CJ Verdell to return to form. The bell cow running back has been a pillar of the Ducks offense for the past three years, but myriad injuries have limited his play for a quarter here, a half there and the […]

EUGENE — For Oregon to achieve its goals it needs CJ Verdell to return to form.

The bell cow running back has been a pillar of the Ducks offense for the past three years, but myriad injuries have limited his play for a quarter here, a half there and the final two games of last season.

One of only two FBS players with over 2,500 career rushing yards and 500 career receiving yards, Verdell has made maintaining his body an even higher priority this offseason with the hopes of staying on the field all season.

“Been taking the time to come in earlier in the mornings, getting my body warmed up, stretched out, have the trainers work on me if need be,” Verdell said. “Trying to get nice and loose before I get out there and practice.”

Keeping Verdell healthy has been a riddle Oregon has yet to solve and at this point is willing to accept. He plays with a ferocity that can’t be taught, is admirable and also puts him at risk.

The only way to minimize that risk is to limit his reps, which the Ducks did in the spring and selectively in fall camp. He missed at least one day of practice during camp but is back to full speed of Saturday’s season opener against Fresno State (11 a.m., Pac-12 Network).

“One thing that we know, and I think CJ would tell you is that he plays his best football when he’s practicing,” Oregon coach Mario Cristobal said. “If you try to almost treat him like a sacred cow it doesn’t work. He doesn’t get in football shape. He can’t hit top speeds. It doesn’t fit his mentality or the culture.”

The Ducks will lesson the load on certain players for strategic purposes and even during live contact they seldom if ever tackle to the ground once the season arrives.

Verdell is still getting reps in the situations necessary to prepare him for pass protection, but lowering his shoulder for extra yards is reserved for games.

“He plays a physical game of football and he’s not going to change; that’s just his DNA,” running backs coach Jim Mastro said. “He goes until he can’t go. The good news is we can limit his reps because we have guys behind him that are productive as all hell. Got to manage that and hope we can get him through.”

Verdell enters the season 23 rushing yards shy of moving into eighth in program history and will move into a tie for fifth with his next 100-yard game, which will be the 11th of his career.

The Ducks are 9-1 when Verdell tops that mark, including 2-0 last season, underscoring his importance to Oregon’s overall success. He had just 65 carries for 285 yards with three touchdowns and nine receptions for 96 yards in five games last season and injured his thumb in just the second game.

There are plenty of individual milestones and accolades Verdell could aim for, but his health and the team winning are all he’s focusing on.

Mastro said Verdell and fellow junior Travis Dye have vast knowledge of the game and at this point improving their games is about fine tuning.

“With (Verdell) refining his skills,” Mastro said. “Maybe a little bit better route runner since we’re going to ask our backs to run a lot of routes this year. He’s what you want DNA-wise, just got to keep him healthy.”

Thu Sep 2 , 2021
A study published Aug. 31 in The Journal of Clinical Psychiatry found that manualized equine-assisted therapy for post-traumatic stress disorder shows promise as a potential new intervention for veterans with PTSD. The research was conducted by Dr. Yuval Neria and Dr. Prudence Fisher, both co-directors and principal investigators of the Man O’ War Project at Columbia University […] 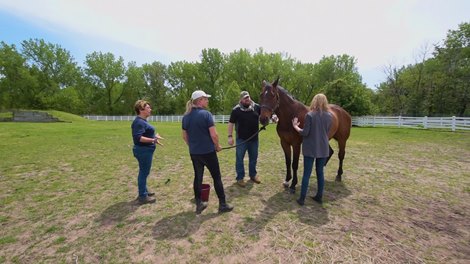