Alice Liveing hadn’t had a period in seven months. Standing uncomfortably in her heels, mingling with friends and acquaintances at an event, she felt the oncoming sensation of a bloated stomach. It was such a protruding, painful bloat that the seams on her dress began to feel tight, and she […]

Alice Liveing hadn’t had a period in seven months. Standing uncomfortably in her heels, mingling with friends and acquaintances at an event, she felt the oncoming sensation of a bloated stomach. It was such a protruding, painful bloat that the seams on her dress began to feel tight, and she made a quick dash home. The next morning, there it was: her long-awaited bleed. “I’ve literally never been so happy to get my period,” she remembers.

When you’re a fitness expert with hundreds of thousands of people following you on Instagram, just like Alice Liveing, it can be hard to strike the right balance of what’s healthy. As Alice rose to success on Instagram, her follower-count growing the more she charted her diet and workouts, the focus quickly became more about how she looked, and less about how she felt.

“I was very proud of my body. I was very proud of the fact that I had worked really hard to get to where I was, but that was so wrapped up in my identity,” Alice admits. On social media, the more she posted pictures of her washboard stomach in a gym kit, the more people would comment on how ‘amazing’ she looked. “It wasn’t about Alice as a person or who she is or what she likes. It was ‘Alice with the abs’.”

The constant external reinforcement that she needed to look a certain way – read: slim and very toned – ended up causing Alice to set unrealistic expectations for herself. “I think that’s where it started to damage my mental health,” she tells me. “My success was so tied up in looking that way, I worried that if I regressed or stepped back from that, people would think, ‘She clearly can’t maintain it,’ or, ‘She obviously doesn’t work hard enough.'”

The regime was intense. She was training about five times a week, and on top of that she would walk everywhere, racking up around 15,000 steps a day. While Alice is keen to stress that “there’s no real, definitive number on how much is over-exercising, because everyone is going to have a different threshold at which they can work,” in hindsight, she can see now how much she was over-doing it, and how it was affecting her negatively. “I would crash into bed every evening, really tired. [I was] just doing so much,” she tells me.

The now-28-year-old recalls making sacrifices in order to pursue her health and fitness goals that meant she struggled to live a balanced life. She would turn down social events because she wanted to get up early for the gym, or choose something on the menu at a restaurant because it was the healthiest option, not what she actually wanted.

“I worried that if I regressed, people would think, ‘she clearly can’t maintain it'”

It wasn’t just Alice, though. The fitness industry as a whole took a long time to reckon with what health truly meant. “If you rewind five, six years, fitness was very much about being in a very small body and looking the part. It was quite disordered, in many ways,” she recalls. “It was like, ‘how can I make things lower calorie? And, how much training am I doing?'” Alice says she got “swept up in that mindset of ‘doing more is better.’ I felt that I had to I had to look the part to be into fitness.”

The wake-up call that something had to change came when Alice’s periods disappeared. “I was on contraception, and I decided to come off that contraception during the time when I was exercising a lot.” She had been told by her GP it should take a couple of months to get her cycle back to normal, and as it was a busy time for her work wise, she almost didn’t notice that nothing had happened for the first few months. “Then a few more months went by and still, nothing happened,” says Alice.

At the six-month mark, feeling concerned, she went to see a doctor. Following a misdiagnosis of polycystic ovarian syndrome, Alice was eventually told she had hypothalamic amenorrhea – the loss of periods due to stress, weight loss, or excessive exercise (which can occasionally be mistaken for PCOS). Her consultant told her in no uncertain terms that her lifestyle choices had contributed to her periods stopping. “She was really blunt with me,” Alice remembers. “She said, ‘You’re doing too much. You need to stop putting your body under so much stress, stop exercising so much and eat some more.'”

The message hit home. Realising that over-exercising had made a material impact on the way her body functioned was an enlightening moment. “There’s such a halo effect on exercise and healthy eating. I really believe that those things are good, but they’re also only good for us when they’re in balance with a healthy life,” Alice says, explaining that her biggest fear was that she might not be able to have children as a result of over-exerting herself where diet and fitness was concerned.

Alice knew she had to change her approach to wellness, but that didn’t make it and easy thing to implement. “It was a real learning experience, and one with trial and error,” she explains. Alice cut down her workouts, and changed the way she thought about food. “I had to learn to enjoy food for what it is, not just seeing it as healthy.”

As a result, Alice’s body has changed shape. “Weight gain is hard,” she says. “I’m more than 10 kilos heavier than I was five years ago.” And while she’s the first to admit that “you don’t just wake up and suddenly you’re happy with yourself,” Alice has adjusted the messages she surrounds herself with to match her new approach. Now, she follows different kinds of people on social media to diversify the ideology she absorbs about wellness. “I stopped following lots of female bodybuilders and people that were ripped, and started following people that have a much more realistic figure, and life, and things that I want to achieve. I follow Tally Rye, and Bodyposipanda – all these people have helped me to realign what I believe to be healthy and happy,” says Alice.

All this has resulted in Alice no longer working out because she feels she has to. “That is not a healthy mindset. And it’s also not one that works in the long term; that motivation is very short lived,” she advises. And it’s paid off in other ways, too. “I sleep better now, and I feel energised when I go and train. It’s not like I’m dragging myself through a session, I really look forward to them.”

It’s been a process that has taken some years, but Alice Liveing finally feels like she’s got her priorities in the right place when it comes to health and exercise. Her body looks slightly different, and she’s never been happier. Now, she’s putting all of those learnings into an app she’s lovingly created, Give Me Strength, which encourages all-round wellbeing and has different plans depending on what your goals are.

“Exercise is great for us. But it’s really, really important to remember that finding a healthy balance with that is also important,” Alice stresses. “There is such thing as too much of a good thing.”

Alice Liveing’s app Give Me Strength is available now here or on all other app providers.

The latest issue of Cosmopolitan UK is out now and you can SUBSCRIBE HERE.

Mon Jun 7 , 2021
New Delhi — The roads of India’s sprawling capital city were choked with traffic on Monday for the first time in weeks. The lowest daily coronavirus infection numbers in two months have led the government to ease restrictions implemented in several areas as the nation grappled with a deadly second […] 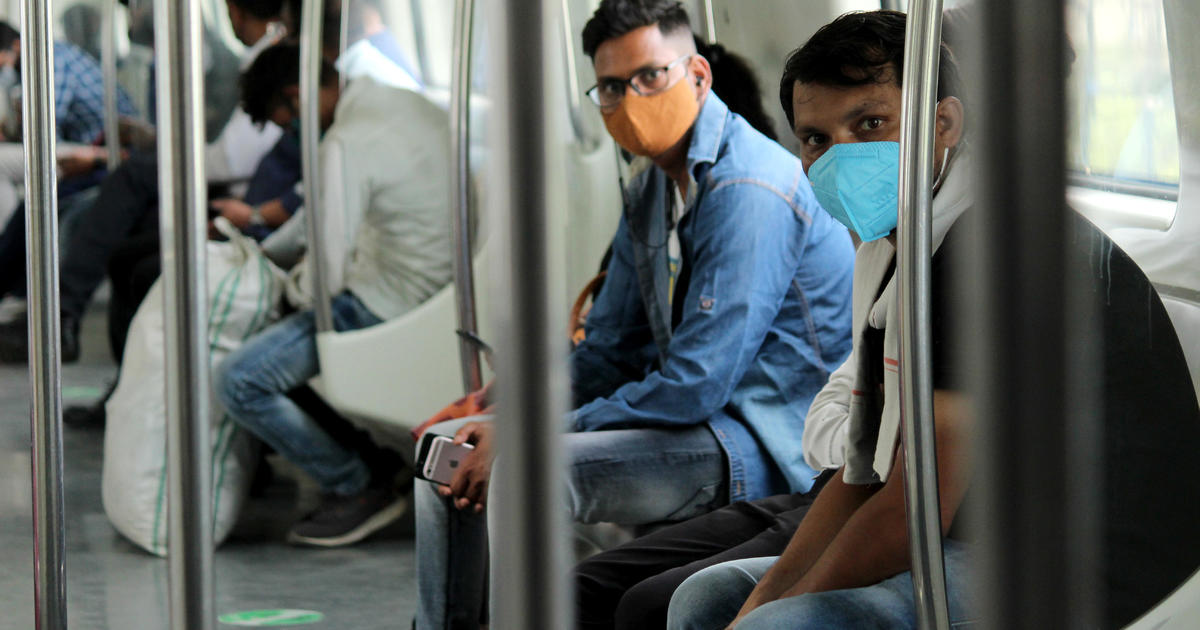