In a study led by National Institutes of Health researchers, scientists found that five genes may play a critical role in determining whether a person will suffer from Lewy body dementia, a devastating disorder that riddles the brain with clumps of abnormal protein deposits called Lewy bodies. Lewy bodies are also a hallmark of Parkinson’s disease. The results, published in Nature Genetics, not only supported the disease’s ties to Parkinson’s disease but also suggested that people who have Lewy body dementia may share similar genetic profiles to those who have Alzheimer’s disease.

“Lewy body dementia is a devastating brain disorder for which we have no effective treatments. Patients often appear to suffer the worst of both Alzheimer’s and Parkinson’s diseases. Our results support the idea that this may be because Lewy body dementia is caused by a spectrum of problems that can be seen in both disorders,” said Sonja Scholz, M.D., Ph.D., investigator at the NIH’s National Institute of Neurological Disorders and Stroke (NINDS) and the senior author of the study. “We hope that these results will act as a blueprint for understanding the disease and developing new treatments.”

The study was led by Dr. Scholz’s team and researchers in the lab of Bryan J. Traynor, M.D., Ph.D., senior investigator at the NIH’s National Institute on Aging (NIA).

Lewy body dementia usually affects people over 65 years old. Early signs of the disease include hallucinations, mood swings, and problems with thinking, movements, and sleep. Patients who initially have cognitive and behavioral problems are usually diagnosed as having dementia with Lewy bodies, but are sometimes mistakenly diagnosed with Alzheimer’s disease. Alternatively, many patients, that are initially diagnosed with Parkinson’s disease, may eventually have difficulties with thinking and mood caused by Lewy body dementia. In both cases, as the disease worsens, patients become severely disabled and may die within eight years of diagnosis.

A growing body of evidence suggests genetics may play a role in the disorder and that some cases may be inherited. Scientists have found that some of these rare cases can be caused by mutations in the gene for alpha-synuclein (SNCA), the main protein found in Lewy bodies. Further studies have found that variants in the gene for apolipoprotein E (APOE), which is known to play a role in Alzheimer’s disease, may also play one in Lewy body dementia.

To do this, they compared the chromosomal DNA sequences of 2,981 Lewy body dementia patients with those of 4,931 healthy, age-matched control participants. Samples were collected from participants of European ancestry at 44 sites: 17 in Europe and 27 across North America. The DNA sequencing was led by Clifton Dalgard, Ph.D., and researchers at The American Genome Center, a series of state-of-the-art laboratories at the Uniformed Services University of the Health Sciences and supported by the Henry M. Jackson Foundation for the Advancement of Military Medicine.

Initially, they found that the sequences of five genes from the Lewy body dementia patients were often different from those of the controls, suggesting that these genes may be important. It was the first time that two of the genes, called BIN1 and TMEM175, had been implicated in the disease. These genes may also have ties to Alzheimer’s and Parkinson’s diseases. The other three genes, SNCA, APOE, and GBA, had been implicated in previous studies, and thus, strengthened the importance of the genes in Lewy body dementia.

The researchers also saw differences in the same five genes when they compared the DNA sequences of another 970 Lewy body dementia patients with a new set of 8,928 control subjects, confirming their initial results.

Further analysis suggested that changes in the activity of these genes may lead to dementia and that the GBA gene may have a particularly strong influence on the disease. The gene encodes instructions for beta-glucosylceramidase, a protein that helps a cell’s recycling system break down sugary fats. The researchers found that both common and rare variants in the GBA gene are tied to Lewy body dementia.

“These results provide a list of five genes that we strongly suspect play a role in Lewy body dementia,” said Dr. Traynor.

“Although Alzheimer’s and Parkinson’s disease are molecularly and clinically very different disorders, our results support the idea that the problems that cause those diseases may also happen in Lewy body dementia,” said Dr. Scholz. “The challenge we face in treating these patients is determining which specific problems are causing the dementia. We hope studies like this one will help doctors find precise treatments for each patient’s condition.”

To help with this effort, the team published the genome sequence data from the study on the database of Genotypes and Phenotypes (dbGaP), a National Library of Medicine website that researchers can freely search for new insights into the causes of Lewy body dementia and other disorders.

About the National Institute on Aging (NIA): NIA leads the U.S. federal government effort to conduct and support research on aging and the health and well-being of older people. Visit the NIA website for information about a range of aging topics in English and Spanish. Learn more about age-related cognitive change and neurodegenerative diseases via its Alzheimer’s and related Dementias Education and Referral (ADEAR) Center website. Stay connected with NIA!

About the National Institutes of Health (NIH):
NIH, the nation’s medical research agency, includes 27 Institutes and Centers and is a component of the U.S. Department of Health and Human Services. NIH is the primary federal agency conducting and supporting basic, clinical, and translational medical research, and is investigating the causes, treatments, and cures for both common and rare diseases. For more information about NIH and its programs, visit www.nih.gov.

Dietitian, 31, who got her dream body by eating MORE reveals the four easy ways to boost metabolism

Wed Feb 17 , 2021
A dietitian who has a better body aged 31 than she did in her twenties has revealed the four easy ways to boost your metabolism and lose weight, without having to starve yourself. Leanne Ward, from Brisbane, got her dream figure by eating more, ditching calorie counting and ‘listening to […] 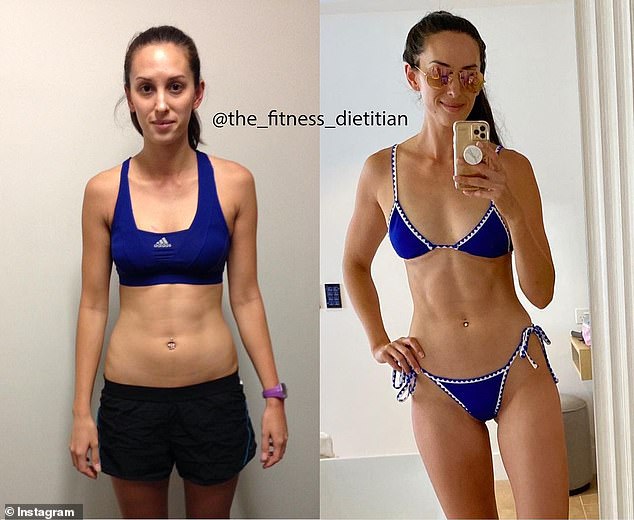